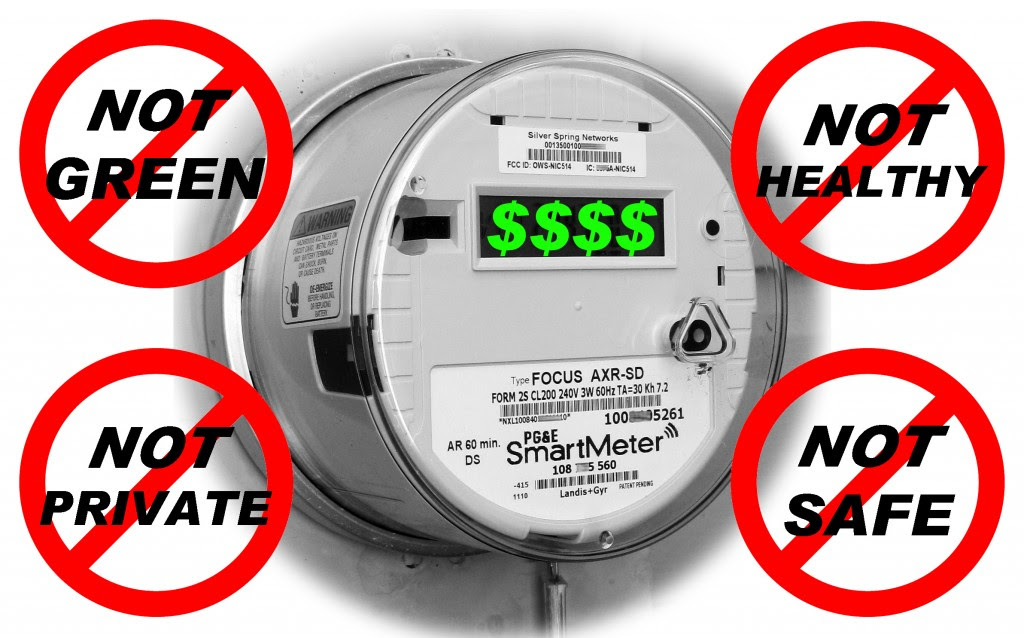 Insightful students of history readily note parallels between the Manhattan-Rochester coalition’s covert research on radiation weaponry in the 1950s, and the smart meter narrative in the U.S. today.

Unethical human experimentation took place on vulnerable populations in Missouri in the decades following WWII. The public narrative was that scientists were researching whether they could shield American cities from Russian warplanes using harmless smokescreen cloud dispersals.

In truth, college students were not privy to the true nature of the tests which were to spray low-income predominantly black neighborhoods in St. Louis with radioactive materials, for scientists studying offensive weaponry.

In her PhD dissertation in 2011, Lisa Martino-Taylor researched the details of the partnership between the various players who comprised the Manhattan-Rochester Coalition, including

Her research examines how covert projects can be layered with secrecy, while tactics are applied to create ethical lapses inside an organization. She explored how organizations also control public dissent by stifling debate, distorting the reality of harmful actions, and manufacturing false security claims.[1]

While a tight-knit group knew the true nature of the St. Louis study, thousands who implemented the project and who participated did not.

A similar elite group of insiders is participating in the smart meter narrative, including Lawrence Berkley Labs, except that the cast of players has been expanded to include the telecom industry, utilities, regulators, the tech sector, and state and federal elected officials.[2]

And, most alarmingly, misinformed environmentalists promoting vague concepts of energy efficiency are among the most outspoken smart meter advocates.

While the utility industry and its regulators continue to claim that smart meters only collect data about when electricity is used, and not how, U.S. Director of National Intelligence James Clapper let the cat out of bag in January, stating:

In the future, intelligence services might use the [internet of things] for identification, surveillance, monitoring, location tracking, and targeting for recruitment, or to gain access to networks or user credentials.

The Guardian reported on Feb 9th that:

Security experts examining the internet of things take as a given that the US and other surveillance services will intercept the signals the newly networked devices emit, much as they do with those from cellphones.

The statement marked a major shift in the continuum of boundary violations as the nation turns on its own people. While imperialism dominates foreign policy, the adoption of “dual-use technologies” implements militaristic control of essential services (electricity, gas, water) and comprehensive surveillance of a deceived populace.

Dual use may have been a tactic to mask defense-related activity under a blanket of industrial research, production, and add additional layers of secrecy through intellectual property laws.

The Manhattan-Rochester coalition instilled fear and bolstered the urgent need for funding and mobilization of resources based on security threats from the Soviets. The smart meter narrative instills fear and bolsters the need for mandated investment based on threats from climate change, global warming, the need to divest from fossil fuels and nuclear energy, and the threat of terrorism. The inherent danger contains elements of reality, but the sustainability guise manipulates the core values of an unsuspecting public to justify immoral, reckless actions.

The U.S. Army denied any public health risk associated with the St. Louis cloud study. The pro-industry FCC has granted the same immunity to collaboration between the wireless industry and telecoms. FCC guidelines were established for acute short-term exposures of adult military personal for heating/thermal impacts only, and are inapplicable for current exposures and for non-thermal impacts, [4] especially for infants, pregnant women, and the medically vulnerable.

The U.S. denied the existence of previous reports of harm while spraying unsuspecting St Louis residents with radioactive materials. The FCC denies the existence of thousands of studies indicative of harm due to exposure to non-ionizing radiation, especially from research conducted by Soviet bloc nations. [5]

The U.S. Army denied the need to obtain informed consent for the St. Louis studies. At least 15,000 Worcester, MA residents were auto-enrolled in the National Grid pilot. Over 180,000 residents did not provide informed consent regarding experimental WiMax towers blanketing the city with a class 2B possible human carcinogen.

The official smart meter rollout in the U.S. began in 2009, financed by taxpayers’ economic stimulus funds, while wireless AMR meters were already covertly modified to transmit continuously in many communities.

In the 7th year of deployment that started in 2009, there are 7 reasons to be greatly concerned about the purposeful layering of deception beneath the public narrative of the smart grid:

The crippling onset of electromagnetic hypersensitivityassociated with smart meter installation, also known as microwave illness, has been socially engineered to correlate with conspiracy theory and tin foil hats, while shifting scrutiny towards evidence of harm rather than proof of safety.

When Cold War scientists concocted their chilling plan to spray radioactive aerosols on American civilians, they initially chose Minneapolis. When they encountered public and political resistance, they instead targeted a St. Louis slum “where residents were less likely to be educated, inquisitive, or to question authority.”

Question authority, now. There is nothing smart, sustainable, informed, or ethical, about smart meters.

Patricia Burke works with activists across the country and internationally calling for new biologically-based microwave radio frequency exposure limits. She is based in Massachusetts and can be reached at stopsmartmetersMASS@gmail.com.

This entry was posted in Fire Hazard. Bookmark the permalink.